Millions of Americans drink coffee each morning. Many people make coffee at home, but most grab their coffee as they run out the door and off to work. Some people are Starbucks fans, but there are also a lot of die hard Dunkin Donuts fans.

If you live on the East Coast of the United States, you might be well versed in Dunkin Donuts. Originally founded in Massachusetts, there are now 12,871. For those who live on the West Coast, it might be your first time seeing this chain pop up, as they open more locations all over the country.

There have been a lot of opinions regarding the best Dunkin Donuts Coffee drinks, but only regulars know about the secret menu. The secret menu is often publicized by Dunkin’ Donuts online, but other drinks have been created by the die-hard fans that make up Dunkin’ regulars.

Some of these secret menu items are more popular than others, so we listed the 20 best Dunkin Donuts secret menu coffee drinks to help you next time you order. Have you tried any of the drinks below?

Sometimes a hot drink just tastes better. Whether it is a cold day, or you are just in the mood for a hot drink, there are plenty of interesting hot drinks to try at Dunkin’. Everything from a berry-flavored hot chocolate, to a coconut mint drink, is possible when you are looking for interesting secret menu combinations.

Although chocolate and berries are not only reserved for Valentine’s Day, this drink is definitely different from the norm. It’s true, not everyone likes fruit and chocolate, but a lot of people do.

If you are looking for something new to try, this is definitely that. Especially if you are someone who loves the combo of chocolate strawberries, then you can easily ask for this secret menu drink.

Pretty much everything tastes good with chocolate, and toffee is another flavor that pairs well. English toffee is typically hard on the teeth, but this drink is not. Actually, this drink does not always come with coffee, but you can always add in a shot or two of espresso to give it a caffeine kick.

Coconut, mint, and chocolate are three flavors that surprisingly pair well together. They are a perfect drink for the holidays as well. It is almost like drinking a peppermint patty. With chocolate and mint already going well together, the coconut comes in to subtly add a bonus. Add coconut milk for added coconut creaminess.

Similar to the classic caramel macchiato, this gives a secret menu twist. It brings in the popular caramel flavoring. With sweet and salty flavors coming together, this is basically like eating a piece of caramel chocolate plus coffee. It’s definitely one to try.

If you are one who needs to have caffeine in everything you drink other than water, then you might avoid drinking hot chocolate. Despite this, hot chocolate is tasty and this drink will be sure to give you that kick you need. It gets its name from the classic drink “Dirty Chai”, which is just a chai latte with espresso. The dirty hot chocolate is basically a mocha but made with hot chocolate mix versus mocha syrup.

Whether you love or hate traditional eggnog you most likely will like this drink. There is actually no real eggnog involved in this drink. Instead, it combines a few flavors to try and recreate the classic eggnog flavors. You can drink this during the holidays, or any time of the year. If there is no eggnog flavor at your local Dunkin’, you can omit that and it will still taste very similar to the traditional flavor of eggnog.

Iced coffee has taken over the world, and no one does a specialty iced coffee drink better than Dunkin’. Hot coffee is good, but sometimes an iced drink just hits your taste buds better. It is easier to drink iced coffee, less dangerous while driving, and Dunkin’ also offers blended iced drinks as well called Coolattas.

Similar to any other frozen drink, a Coolatta is sweet and blended. Sometimes Coolattas have coffee, while sometimes they are made without. Either way, coffee can always be added for an extra kick of caffeine.

Whether it is hot outside and you are in the mood for peaches, or you are looking to relive the feeling of summer, this Coolatta can help you do that. Although it typically does not include coffee, it would definitely add a bit of a nutty flavor that would go along well with the peaches and cream. Recommended on a day when you want to try something new.

Who doesn’t love birthday cake? Instead of waiting for your own birthday or buying a cake from the store, you can head to your local Dunkin Doughnuts. This is another blended iced option that is perfect on a day that you want to cure your sweet tooth.

Who doesn’t love chocolate and berries? Although there is a warm version of this, sometimes you just want iced coffee. You can choose your milk, whether that is regular milk or a plant-based variation like almond or oat. Oat makes it a bit creamier and goes along well with the blueberry flavoring.

Nutella is something that should be served with every meal, including coffee. You cannot go wrong with Nutella, so if you cannot eat it, you should be able to drink it. This iced coffee may look like a typical iced coffee, but it comes with a Nutella surprise. (The surprise is how similar it tastes to real Nutella!)

As mentioned, there is nothing better than Nutella at any time of the day. The main difference between the iced coffee and the frozen version is that this is a bit creamier, and also blended. It is nice to have options, and for days where you want a blended and creamy drink, the Nutella Frozen chocolate is the perfect option. It is also a great substitute for dessert!

Hungry? Drink a Snickers. No, but seriously, this is a meal in a glass. For a peanut butter lover, this secret drink is better than anything else on the menu. There are a few other secret drink items that are candy bar flavors, but Snickers is definitely the most popular and complex of the bunch.

Everyone loves a good blended drink, but if you are not in the mood for coffee and on your way to work, a Strawberry Pineapple Coolatta might do the trick. It combines sweet and sour for a perfectly puckering satisfying drink.

Sometimes you just want something creamy and delicious along with your coffee. This takes that to another level, offering caramel, coconut, and nutty flavoring. It is a flavor explosion and something you need to try at least once, but you might want to keep ordering it!

For anyone that is a cereal lover, Captain Crunch is regarded as one of the best around. Rather than taking a bowl of cereal on the go, a Captain Crunch Coolatta is a good option. It is quite fruity, but there is an option to make it a bit salty if you wish.

Although it is not something that they make at Dunkin’, as stated by @Fiji_Rich on Twitter, you can ask for a Monster Energy shot with any beverage. They will give one to you. If you are extra tired, or simply looking to get a bit of extra energy, this is an option.

Typically when you order a caramel macchiato at Dunkin’ Donuts, you take that first sip and get everything on the bottom. This can be really strong if the espresso goes straight into your mouth. Instead of this, order it upside down. This will allow everything to mix properly. It will also ensure that you don’t break your straw, or spill on yourself while attempting to stir your drink.

Ready to Run to Dunkin’?

Even if you have traditionally been a Starbucks fan, you most likely have to admit that Dunkin’ offers a lot of different flavor options.

From egg nog to caramel, mint, coconut, even berry, there are so many options to choose from off of the regular menu. Because of this, it’s really easy to take advantage of the secret menu. You can even consider making your own flavor combinations.

You can even pick two of your favorite flavors and combine them. Whether that is a hazelnut and berry combo making Nutella-berry, or something else, you never know what you might come up with! 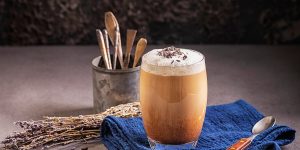 What Is Cappuccino Coffee? (Easy Guide) 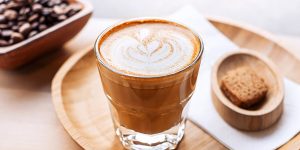 What Is Cortado Coffee? (Easy Guide) 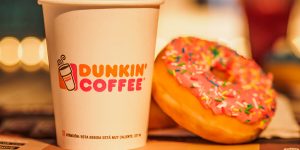