Coffee cakes and cinnamon rolls often have similar flavor profiles. The warming spices of cinnamon and nutmeg are often found in both, so it makes sense to combine them into one sweet treat. The cake should also be topped with cream cheese icing, for good measure.

This super easy Cinnamon Roll Coffee Cake tastes exactly like a cinnamon roll in coffee cake form. The tender cake layer is a classic coffee cake batter with a cinnamon swirl topping and decadent cream cheese icing. The topping gets crumbly in the oven which is the perfect contrast to the moist and delicate cake. It truly is the best of both worlds!

You can’t have coffee cake without the cake layer. This recipe begins with a buttery brown sugar base with eggs, flour, and vanilla. Using a stand mixer incorporates lots of air into this cake, which leads to a light and tender cake. Be extra careful to not overmix the batter, as the flour can develop too much gluten and become tough. 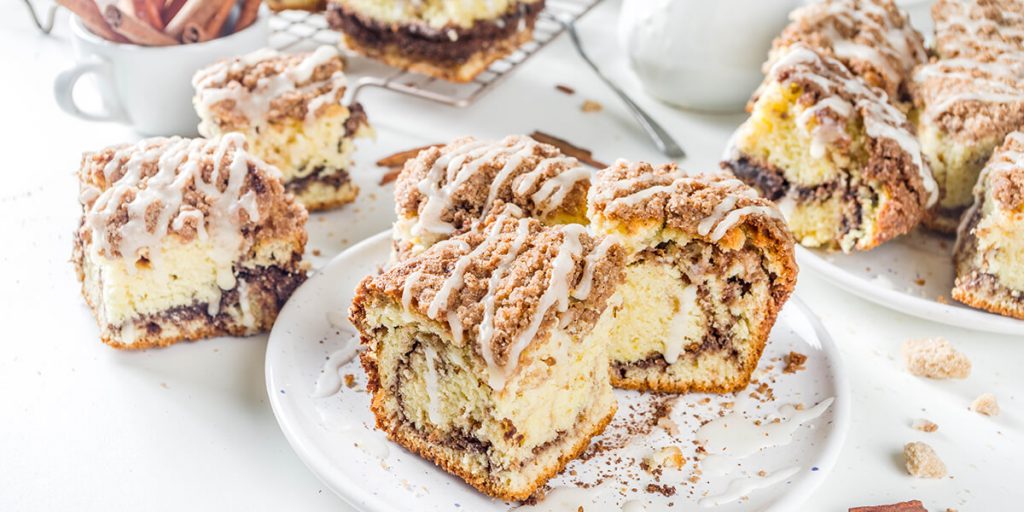 Once the batter is poured into the pan, the fun doesn’t stop there. A rich cinnamon topping made with butter and nutmeg is swirled into the cake. The topping bakes down into the cake, leaving a beautiful and crunchy crumb topping. The cinnamon swirls remind you of rich, fluffy cinnamon rolls!

As if the cinnamon swirled cake wasn’t enough, this coffee cake is topped with silky cream cheese icing once baked. Powdered sugar, softened cream cheese, milk, and vanilla make a classic glaze that you would normally see on cinnamon rolls. The cream cheese sends this glaze over the top, reminding you that this is indeed a cinnamon roll-inspired cake.

This cinnamon roll cake is hands-down the best coffee cake ever. By combining cinnamon rolls and coffee cake, you get the most perfect dessert with sweet, crunchy, delicate, and creamy layers all in one bite. Your family will go nuts for this Easy Cinnamon Roll Coffee Cake.

For the Coffee Cake:

Preheat the oven to 350 degrees F. Butter and flour a 9×12 baking dish and set it aside.

Make the cake batter. In a stand mixer fitted with a paddle attachment, cream together the softened butter and packed brown sugar until light and fluffy at low speed. Add one egg at a time, beating well in between each addition, then add the vanilla. Stop the machine and scrape down the sides of the pan with a spatula before mixing once more.

In a separate bowl, sift together the flour, baking powder, and salt. Add the dry ingredients alternatively with the whole milk in 3 additions, beginning and ending with the dry ingredients. Stop the mixer when the batter is just combined. Do not overmix or else the cake will become tough while baking.

In a medium-sized bowl, mix the topping ingredients until fully combined.

Pour the cake batter into a greased and floured 9×13 baking dish. Spread the topping over the cake and swirl it into the batter with a knife or skewer. Bake in a preheated oven for 30 minutes or until a cake tester comes out clean and the cake is golden brown and springs back when touched.

Remove the cake from the oven and allow it to cool completely.

Once the cake is cooled, make the glaze. Whisk all glaze ingredients together in a bowl until smooth and creamy. Top the cake with the glaze. Cut into squares and serve. 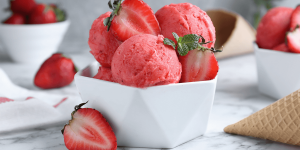 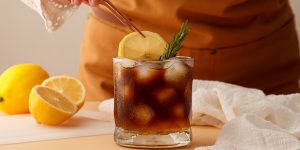 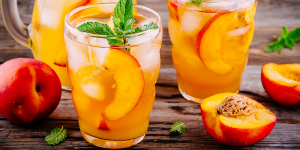