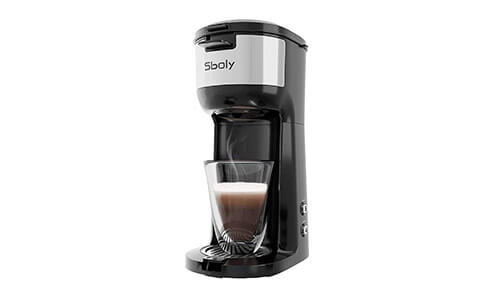 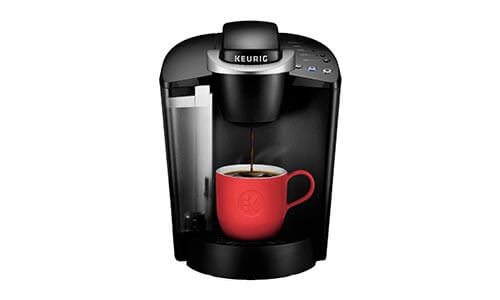 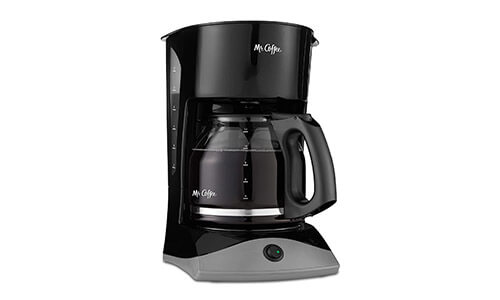 Black is a classic color for kitchen appliances. It’s sharp, fits with any color scheme, and doesn’t show dirt and stains as much as other colors so it’s easy to keep it looking nice. We’ve picked out our favorite black coffee makers and reviewed them here. You’ll find something on the list for any taste or kitchen!

The Sboly Single Serve Coffee Maker is less than 6 inches across. That slim profile means it fits easily on kitchen counters, work desks, or anywhere you want a quick cup of joe. Its 2-way brewing can use either ground coffee or pre-made pods so it’s a versatile choice, too.

The Keurig K-Classic is one of the fastest single-cup brewers, giving you a hot cup of coffee in 1 minute or less. It’s easy to use with a convenient removable reservoir that doesn’t need to be filled after every brew.

The Mr. Coffee drip machine is a staple in many American households. Its streamlined design and on/off operation make it the easiest way to brew large batches, giving you a full 12-cup carafe of delicious coffee in minutes and keeping it hot on the automatic warming plate. 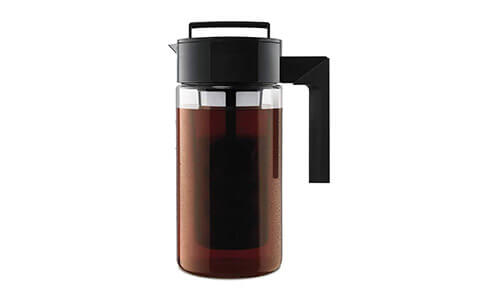 Cold brewing is a great way to make a smooth, low-acid cup of coffee. This Takeya Japanese cold brew system cuts down on the mess and waste of paper-filtered cold-brewers, with a tight seal that keeps the concentrate fresh for up to 2 weeks in the fridge. 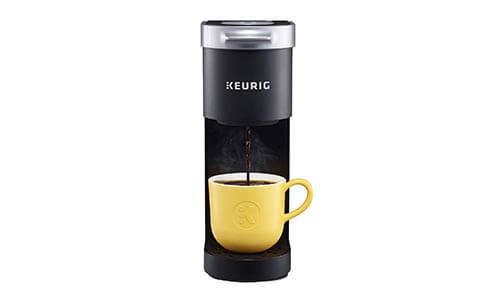 The K-Mini is the smallest Keurig brewer, with a 5-inch profile that will fit on even the tightest kitchen counters. Built-in cord storage makes it easy to move and store, too, and it still fits tall travel mugs thanks to its removable drip tray. 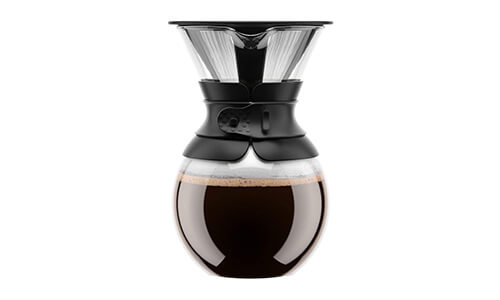 The most unique feature of the Bodum Pour Over Coffee Maker is its permanent steel filter. This doesn’t just mean less waste than other pour-over systems but also lets more oils from the grounds into the cup. You’ll get the complex notes of pour-over but with more body and stronger flavor.
The design of the Bodum

Pour Over Coffee Maker is both eye-catching and convenient. Just take out the filter and it becomes a serving carafe, with a stay-cool silicone band so you can pour comfortably right after brewing. 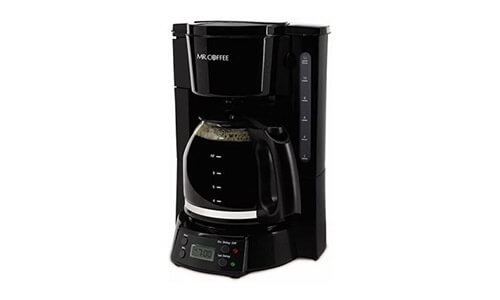 The Mr. Coffee Programmable Coffee Maker has the user-friendly design the brand is known for, with the added benefit of a timer so you can set it to brew automatically. The included carafe and removable brew basket are dishwasher-safe, making it as easy to clean as it is to use. 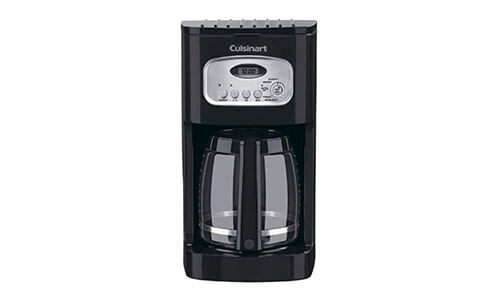 Versatility is the main advantage of the Cuisinart DCC-1100 Coffeemaker. The small-batch setting lets it brew any amount up to 12 cups with the same great flavor. A built-in water filter ensures you’ll only taste the coffee, not whatever impurities are in the water.

This Cuisinart coffeemaker is a convenient choice, too. It’s fully programmable and has an automatic cleaning setting, with an included gold-tone filter for less waste and better flavor. 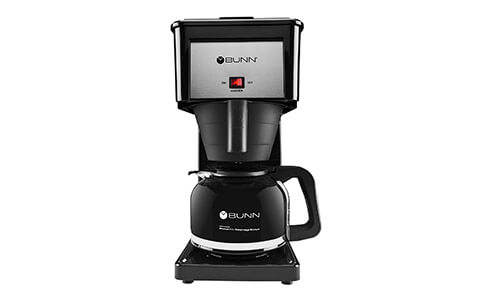 The unique design of the BUNN Velocity Brew isn’t just for looks. The hanging filter basket extends the water contact time and is easy to remove for filling and cleaning. Combined with the advanced showerhead, this brews a delicious pot in about half the time of other drip brewers.

BUNN’s attention to detail shines through in features like the carafe’s innovative no-drop spout. Separate switches for the brew and warmer give you full control over your coffee’s temperature and quality. 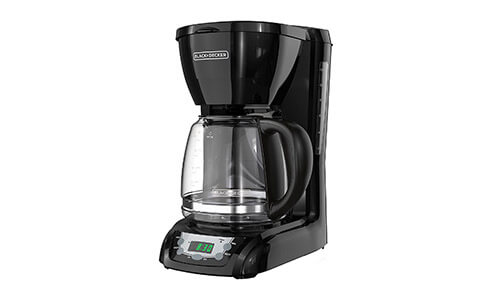 The Black+Decker 12-Cup Coffee Maker has an intuitive control panel and illuminated LED screen so users can quickly program and start their brew. It has good temperature control, brewing coffee hotter than many drip brewers and unlocking more flavor from the grounds. 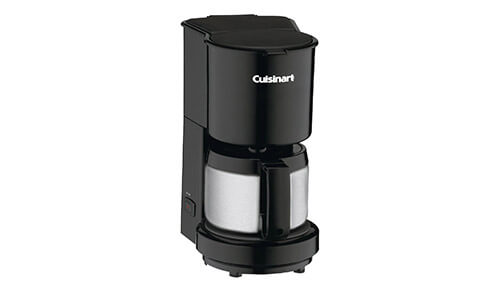 If you only ever brew up enough for one or two people, the compact 4-cup Cuisinart DCC-450 is the perfect coffee maker. Its small batches taste better than those from larger brewers, with an included thermal carafe that keeps coffee hot without burning it and ruining its flavor. 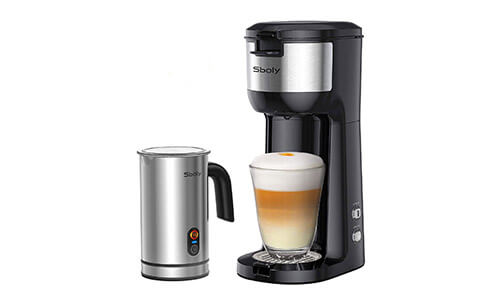 The Sboly Espresso Machine is the easiest way to make drinks like lattes and cappuccinos at home. It brews coffee from either pods or grounds, with a 3-in-1 frother to texture hot or cold foam. The whole process only takes about 3 minutes, just as convenient as other single-serve brewers.

There are tons of ways to brew coffee, but you can group all of them into 4 categories based on their brewing style: immersion, drip, pressure, and boiling.

Let’s take a quick look at the brewers in each category and what you should expect from coffee brewed using each style.

In immersion brewing, the water is in direct contact with the coffee throughout the brewing process. This could be hot water with a short brew time (3-5 minutes) or cold water with a long brew time (18-24 hours).

The most common immersion brewers, like French press and soft brew, use metal filters instead of cloth or paper. This results in a full-bodied cup of coffee with a strong flavor and aroma but also lets more grit and sediment into the cup, even if you use a coarse grind.

You’ll also find some hybrid immersion methods that do use extra filtration, like siphon brewers (cloth-filtered) and clever brewers (paper-filtered). These are a good option if you want the body of immersion brewing but with a smoother texture in the cup.

In drip brewing, hot water is dispensed over ground coffee and allowed to drip down through a filter into a cup or carafe. The filter ensures a grit-free cup and also removes some of the coffee’s oils, resulting a more balanced, nuanced flavor than immersion brew.

Automatic versions are the top choice for convenience. Single-serve pod brewers, like K-Cup and Nespresso brewers, can produce a cup in minutes with no messy clean-up. Automatic drip machines often include features like pre-programmability to add to their convenience.

Of all the brewing methods, manual drip brewers like Chemex and pour-over drippers give the user the most control over the process. This is what makes them so popular with baristas but also gives them a reputation for being difficult and finnicky.

Examples: Pump-driven espresso, Portable espresso, Moka pot, AeroPress
These machines use pressure to force the water through the ground coffee, extracting tons of flavor in the process. This results in the strong flavor, creamy texture, and frothy crema that espresso is known for.

The main difference between these brewers is how much pressure they produce. Pump-driven electronic machines, like the espresso makers you’ll see in cafes, produce the most consistently high pressure. They’re also expensive and bulky, though, and good ones are rare on the home market.

A Moka pot or hand-held espresso maker is a more compact and affordable option, and they’re also much more portable for when you’re traveling. The trade-off is they don’t always produce the full 15 bars of pressure during brewing that you need for a true espresso shot.

Boiling coffee was the traditional way to prepare it, but it’s the least-common brewing method in the modern world.

Aside from low-tech options like cowboy coffee, the only commercial boil brewer is the Ibrik, a copper pot used for making Turkish coffee.

How Long Should You Keep a Coffee Maker?

You can keep using your coffee maker as long as it will still brew a hot, delicious cup. How long you should expect that to happen depends on the style and brand of the brewer.

Manual coffee makers like French presses, pour-over drippers, and Moka pots can theoretically last forever with proper maintenance. You may need to replace components like the screen or gaskets but the core components won’t wear out over time.

Electric coffee makers have a more limited lifespan. High-end models typically last 7-10 years before they start to fail. Cheaper automatic drip machines tend to wear out after 3-5 years, on average.

Regularly descaling the machine is the best way to keep it running longer. You should clean your coffee maker every 3 months or so to remove build-up in the lines that could lead to future breakdowns.

The Most Common Types of Coffee Makers Explained
https://www.allrecipes.com/article/types-of-coffee-makers/

How to know when it’s time to replace your coffee maker
https://www.cnet.com/how-to/how-to-know-when-its-time-to-replace-your-coffee-maker/

How long should a coffee maker last?
https://owlychoice.com/how-long-should-coffee-maker-last/