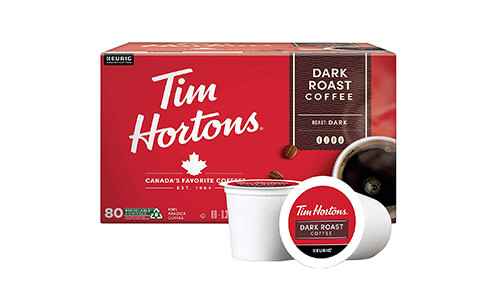 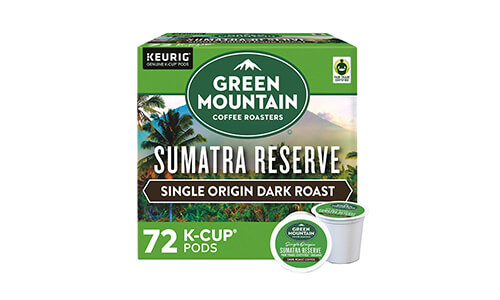 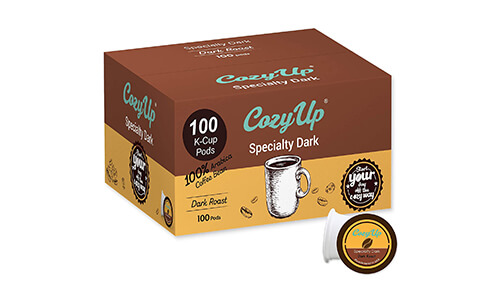 The main complaint against Keurig brewers is that the coffee they make is weak and lacks flavor. Dark-roasted K-Cups pack more flavor and can be a great way to add more punch to your morning brew. Let’s take a look at some of the tastiest dark-roasted K-Cups you can find today.

Tim Hortons is Canada’s favorite coffee, and when you taste their dark roast you’ll understand why. The cup you’ll brew from this pod is rich and bold, perfect for those who like a strong cup of joe. You can recycle the pods, too, so they’re more eco-friendly than other K-Cups.

Beans grown in Sumatra are known for the complexity of their flavors, balancing bright, fruity notes with warmer, darker flavors like spices and brown sugar. Dark-roasting brings out the bean’s natural sweetness, giving you a balanced cup that’s not as bitter as other dark roasts.

These CozyUp pods are a budget-friendly way to brew a bold cup using the latest generation of Keurig machines. It has a classic dark roast flavor, with just the right amount of bitterness and rich chocolatey notes. 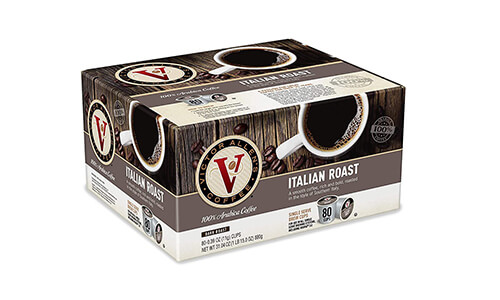 Italian is the darkest of the dark roasts. These Victor Allen’s Coffee Italian Roast pods have a flavor almost as dark and rich as espresso. While the taste might be a bit extreme for some, it’s the perfect pod for true dark roast lovers. 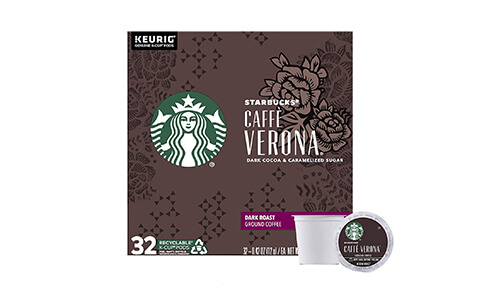 The Caffe Verona blend is the dark roast on tap at most Starbucks cafes, so these K-Cups are a great way to simulate that café experience at home. Starbucks optimizes the beans used in its pods to get the same caramel and dark cocoa flavor notes. 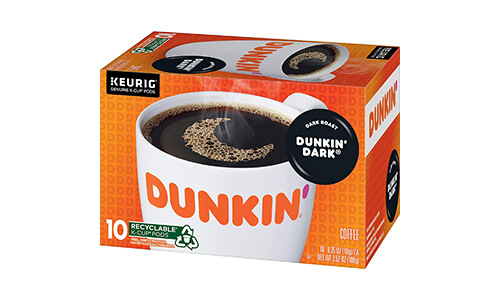 The dark roast from Dunkin’ Donuts is a very drinkable cup of coffee, going down smooth without any lingering bitterness. It also tastes great with sugar and milk, with a strong, balanced flavor that stands up well to flavorings. 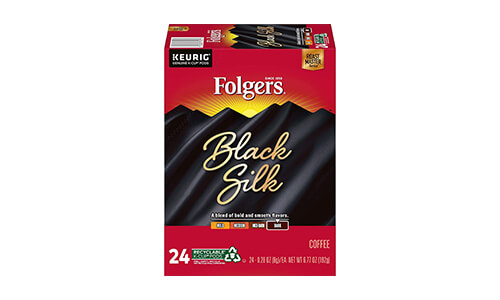 Black Silk is the darkest blend from Folgers, and one of the darkest-roasted K-Cups you’ll find, period. Its roast level is on par with an Italian, producing a very bold flavor with a pronounced aroma and a robust body. 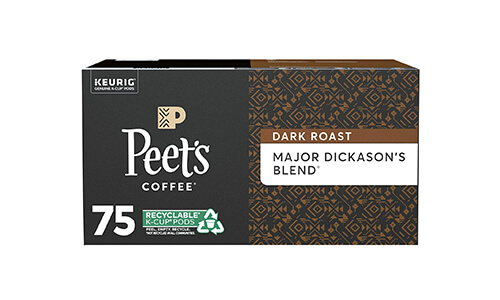 The Major Dickason blend is Peet’s Coffee’s all-time best seller, developed by a coffee gourmand who was one of their first regulars. It’s bold without being overwhelming on the palate, with more nuance and dimension than many dark-roasted beans. 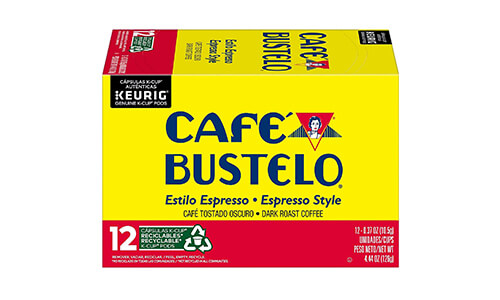 If you’re looking for an espresso-style cup, these Café Bustelo K-Cups are a great option. It’s also the brand of choice for Cuban coffee and pairs well with sweeteners, creamers, and flavorings. This makes it the top choice if you want to make drinks like Cortaditos or Vietnamese-style coffee. 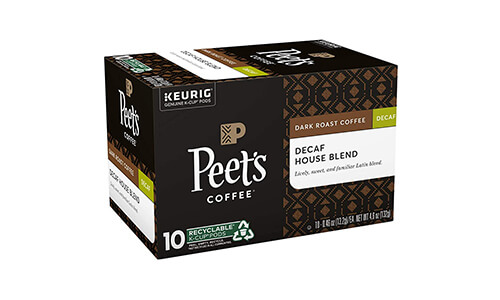 If you love the taste of dark roast but don’t want the caffeine, This Peet’s Coffee Decaf House Blend is a great choice. It’s made from a blend of Latin American beans that’s been naturally decaffeinated so you can enjoy all the sweet, bold flavor notes without the jitters.

Dark roasts taste stronger and that leads many to believe they contain more caffeine, too. The reality is more complicated.

By volume, light-roasted coffee contains more caffeine than a dark roast of the same bean. If you weigh your beans, though, the dark roast will have a slight edge on caffeine content.

Caffeine stays stable during the roasting process. Coffee beans expand as they roast, however, so the caffeine in the bean is spread over a larger area when the bean is dark-roasted.

Much of the moisture in the bean is also lost during roasting, so as the beans expand they also lose mass. The longer a coffee bean roasts, the larger it is and the less it weighs.

Of course, all of these variations are very subtle. More of the differences in the caffeine content of coffees are due to the species of the plant and its growing conditions than how it was roasted.

How Can I Make My K Cup Stronger?

Using a bolder roast is one way to get more flavor out of a K-Cup brewer. Here are a few other tricks you can try to boost the strength of your brew.

Most single-serve brewers have a range of cup sizes. Since they all brew from the same size of K-Cup, this changes the strength along with the quantity.

The smallest serving available will have the most flavor. For most K-Cups, a 4- or 6-ounce brew will taste the best. If you want more coffee than this, use two pods for each cup, brewing each pod on the lowest available setting.

#2: Switch to a reusable filter cup

A reusable filter lets you control how much coffee you use, something you can’t do with a sealed K-Cup. It also lets you pack the coffee in, a process known as tamping in the coffee world. By removing the air between the grounds, the water will drip through more slowly and extract more flavor.

Another advantage of a reusable filter is that you know you’re using fresh coffee. Many of the volatile compounds in coffee dissipate within 15 minutes of grinding. Coffee in K-Cups is pre-ground by default and doesn’t have as much flavor as it did in whole-bean form.

Tamping coffee is one way to extend the water contact time. You can take this even further by putting a used and cleaned K-Cup body inside the reusable filter. This creates a two-chamber system, extending the brewing time for a richer cup.

To do this, remove the foil from a used K-Cup and cut off the upper ridge. Next, slide it down inside the reusable filter and load it up with your ground coffee of choice. The hole in the bottom from its first use will let the water into the second chamber in a slower, more controlled stream.

If you’ve noticed your Keurig coffee isn’t as strong as it used to be, it’s probably time to descale your coffee maker.

The minerals in water are left behind in the lines as it flows through. This builds up into a white, chalky material known as scale. Over time, that build-up can clog the lines and lower the water pressure, resulting in a weak cup.

A coffee machine also provides the perfect breeding ground for bacteria and mold. These can also clog up the works if they’re growing in the lines and add off flavors into the brew.

You can fix both these problems by cleaning your coffee maker. The easiest way is to fill the reservoir with a mix of half white vinegar and half water. Brew it through, then brew a couple of passes of pure water to remove the vinegar taste.

Most people don’t clean their coffee makers nearly as often as they should. Ideally, you should descale your machine every 3 months, and more often if you have hard water. Regular maintenance extends the life of your coffee maker along with making better-tasting coffee, so it’s worth the effort.

Are Reusable K Cups Worth It?

From a cost standpoint, absolutely. Brewing from ground coffee costs around 20-30 cents per cup, depending on what kind of coffee you buy. The average cost for a K-Cup is 67 cents, with a range of around 50 cents on the cheap side and nearly a dollar for costlier pods.

It’s also worth the switch from an environmental standpoint. Plastic K-Cups are used once and thrown away, generating a lot of waste that goes into landfills.

A reusable filter also gives you more flexibility. You can brew whatever coffee you want, including single-origins from coffee shops and local roasters, rather than being limited to certain brands and flavors.

Reusable filter cups are especially helpful for older generation Keurig brewers. Instead of scouring the web for compatible pods, you have a filter that will fit reliably every time you brew.

The only downside of switching to a reusable filter is that it’s messier and less convenient than sticking in a pod. Still, considering you can get a filter cup for about $5-$10, it’s a worthwhile investment.

If you’re looking for the biggest caffeine kick, Starbucks does sell a 2X Caffeine version of their K-Cup, with 260mg of caffeine in the cup. Other brands, like Revv Coffee, have similarly high-octane products.

How Much Ground Coffee Is In A K Cup?

Pre-made K-Cups usually contain somewhere between 9 and 12 grams of coffee, depending on the brand and the style of the brew. This is roughly equivalent to the 2 tablespoons recommended to brew an 8-ounce cup.

If you’re using a reusable coffee filter, like a My K-Cup or similar accessory, 10 grams of coffee is usually a good place to start. It won’t hold much more than that, so if it tastes too weak you’re better off using less water than increasing the amount of coffee.

How Much Caffeine in Dark Roast vs. Light Roasts
https://detourcoffee.com/blogs/news/how-much-caffeine-in-dark-roasts-vs-light-roasts

How Much Coffee Is In a K-Cup
https://www.smartfamilymoney.com/how-much-coffee-is-in-a-k-cup/

Save 61% by brewing coffee with a K-Cup reusable filter
https://www.squawkfox.com/kcup/