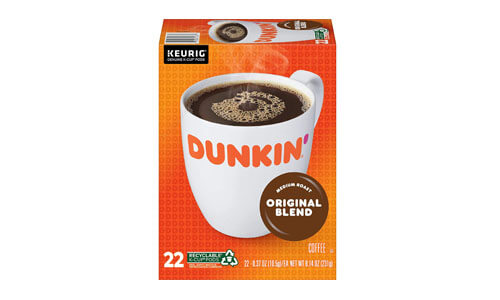 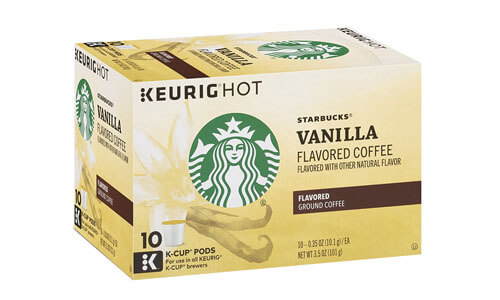 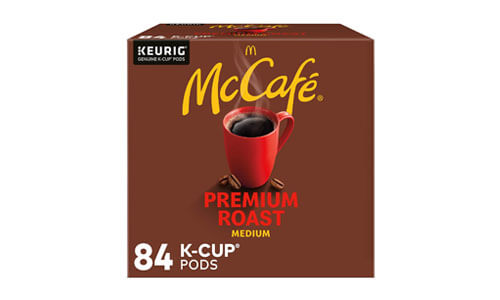 These days, it seems like every coffee roaster has their own range of K-Cups, and all that variety can be overwhelming. We’ve reviewed our top Keurig pods here to help you find your new favorite flavor.

Dunkin’ Original Blend is a smooth, medium-bodied brew perfect for getting you going in the morning. These Dunkin’ K-Cups use the same delicious 100% Arabica blend the company sends to its cafes, giving you that familiar, consistent flavor at home.

Flavored coffee lets you get a sweet cup and more flavor variety without adding tons of sugar and calories. These Starbucks K-Cups start with high-quality beans roasted a bit lighter than most mediums, for a naturally bright taste that perfectly complements the vanilla.

People who knock McDonald’s coffee probably haven’t tried it. The McCafe Premium Roast K-Cups have an aroma and flavor on par to those from brands like Starbucks, with a crisp and clean finish ideal for those who prefer a more mild cup. 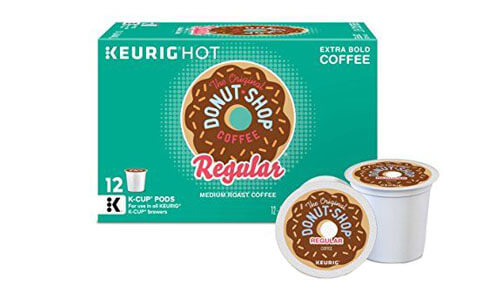 For those who prefer a strong cup of coffee, the Original Donut Shop K-Cups will give you the bold flavor you want without adding the burnt and bitter notes that come from over-roasting. Since they’re always packaged right after roasting and grinding, you can count on fresh flavor from each pod. 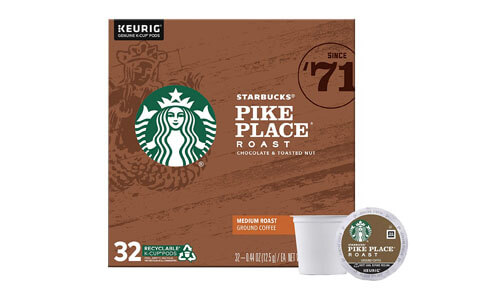 The Pike Place blend was the medium roast served at the original Starbucks Pike Place location in Seattle when they opened in 1971. It’s stuck around this long because customers love its balanced flavor and nutty, chocolatey notes, which are just as prominent in the K-Cup version of the brew. 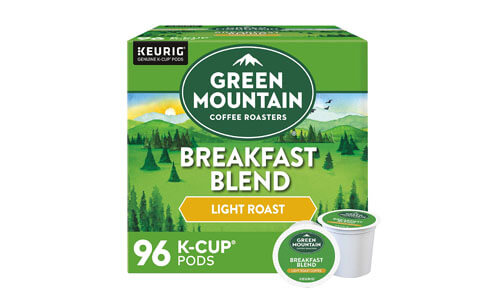 The Green Mountain Breakfast Blend combines beans from Indonesia and Central America. The result is a sweet brew with citrus notes and the full depth and body varieties from Java and Sumatra are known for—in short, the perfect cup to get you going in the morning. 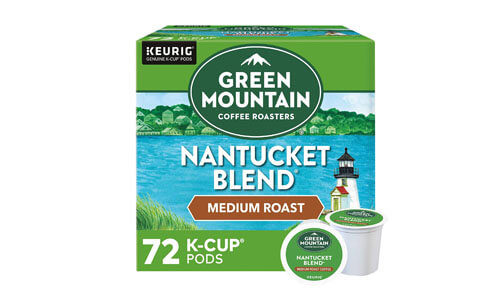 For their Nantucket Blend, Green Mountain mixes smoky Sumatran beans and fruity African beans, with a touch of French Roast mixed in to add caramelized roasting notes. This gives the brew a complex flavor and rich body, great for coffee drinkers who like a bold, unique cup. 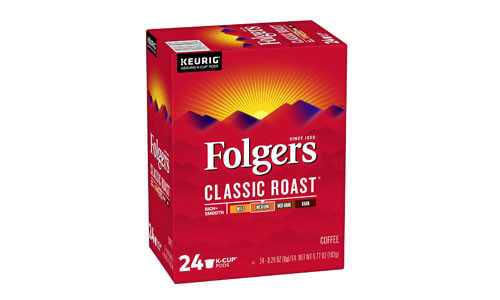 Folgers coffee is the classic in many American households. Their Classic Roast has the strongest aroma of any of their blends, along with a rich flavor that lingers on the tongue without being bitter. It’s a great choice for those who add milk to their coffee, with a taste strong enough to stand up to additives. 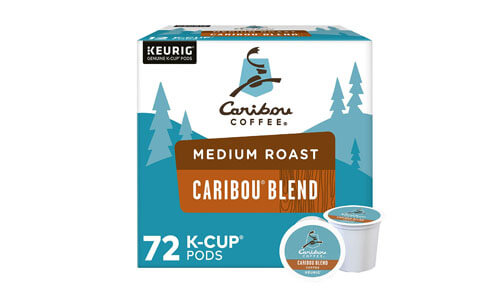 The Caribou Blend from Caribou Coffee is one of their most popular varieties. It starts with spicy, smoky Indonesian beans, adding in brighter fruitier varieties from Central and South America to balance out the flavor. The result is a complex but smooth brew that’s great on its own or with milk and sugar. 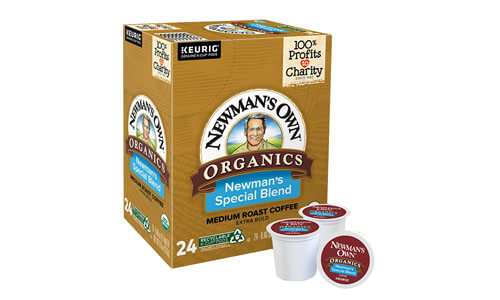 Newman’s Own Special Blend mixes dark-roasted Indonesian beans with medium-roasted beans from Central America, for a strong flavor and body that holds its own when mixed with cream and sugar.
You can feel good drinking Newman’s Own, too, since it’s certified Fair Trade and all the company’s profits go to charity. 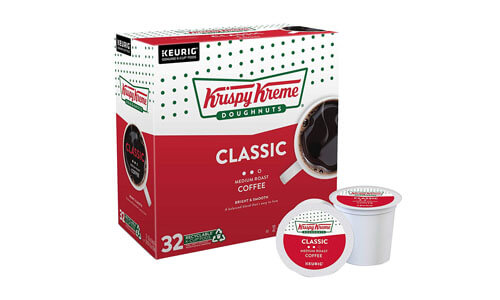 The Krispy Kreme Classic blend is a mix of medium and light-roasted Arabica beans. It’s great for those who like a mild cup with a bright, crisp finish, and still packs the same caffeine punch as bolder blends.

Is There A Difference Between K-Cups and K-Cup Pods?

Technically the terms “K-Cup” and “pod” refer to two different things. A K-Cup is a hard plastic cup designed to fit in Keurig brewers. True coffee pods are soft and look more like teabags.

There’s some confusion around this terminology, however. Some people use “pod” to refer to any pre-packaged coffee, including K-Cups or Nespresso capsules.
If you see something described as a “K-Cup pod”, most of the time they mean a typical hard-sided K-Cup. That’s the form used by all the products we’ve reviewed here, so you can count on them to fit a Keurig brewer.

What Pods Are Compatible With Keurig?

Keurig brewers are built to use hard-sided K-Cups. This is the only way to brew using these machines without additional accessories.

That’s not to say a Keurig is never compatible with other pods. You can buy a reusable Keurig filter basket, such as the My K-Cup adapter, to expand your options.

K-Cup permanent filter adapters are mostly designed to let you use fresh-ground coffee instead of a pre-ground cup. You can also plop a soft coffee pod right down inside them, making your Keurig compatible with these pod styles.

There are still some coffee pods that are off-limits to Keurig (and Keurig-style) brewers. Hard-sided pods and capsules made by other manufacturers won’t fit in Keurig coffee makers. If you have both a Keurig and a Nespresso coffee maker, for example, you’ll still need to buy separate pods for each.

The good news is, each of these brands of capsule and pod has a unique shape and size—that’s the reason they’re not cross-compatible in the first place, and as a result they’re also pretty easy to tell apart.

Do Starbucks Pods Work in Keurig?

Most of the Starbucks-branded coffee capsules you’ll find in stores are K-Cups and will work in Keurig coffee makers. This isn’t true of every single-serve pod Starbucks makes, however.

Starbucks also makes a proprietary single-serve brewer, the Verismo. Verismo capsules look similar to K-Cups but are shorter and have ridges around the outside of the cup.

The packaging of Verismo capsules is distinctive, with the name of the brewer clearly marked on the front. If you want to be sure, just look at the cups. If it’s smooth, it’s for Keurig.

Do All Keurig Machines Use K-Cups?

Yes, they do—but the full answer is unfortunately not that simple. All Keurig coffee makers use K-Cups, but they don’t all use the same K-Cups.

When Keurig first hit the market, all their machines used the same cups. They could also be used by any coffee capsules that used the same dimensions and hard-sided design. This led to several companies releasing unofficial versions of the K-Cup.

To combat this, Keurig released a new line of coffee makers in 2014, the Keurig 2.0 brewing system. Keurig 2.0 brewers expanded the size options for users, adding full-carafe and a function for condensed, espresso-like shots.

These 2.0 brewers had another feature, though: they have a sensor in the K-Cup area that rejects non-official pods. This was initially an issue for using regular ground coffee, too, though Keurig has since released a My K-Cup reusable filter for their 2.0 machines.

There’s a simple way to tell the difference between 1.0 and 2.0 K-Cups. Look at the label on the top of the cup. If there’s a white or silver ring around the outside of the label, it’s compatible with 2.0 Keurig brewers.

What other K-Cup styles are there?

Along with standard K-Cups for single-serve brewers, Keurig has released a line of specialized pods to make different quantities and drink styles.

You can buy adapters for standard Keurig coffee makers that let you use some of these specialized pods in your machine if you want to. The exception to this is the K-Carafe, which is significantly larger than the other pod types and will only work in Keurig dual brewers.

Here are the non-standard K-Cup styles you might come across as you’re shopping:

Can I use coffee pods in a Keurig brewer?
https://www.coffeedetective.com/can-i-use-coffee-pods-in-a-keurig-brewer.html