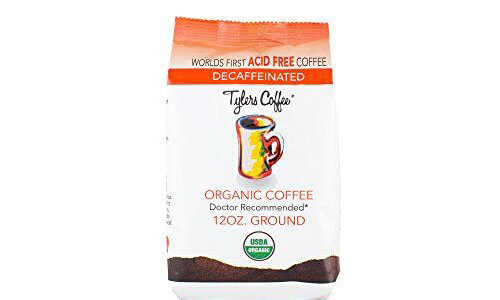 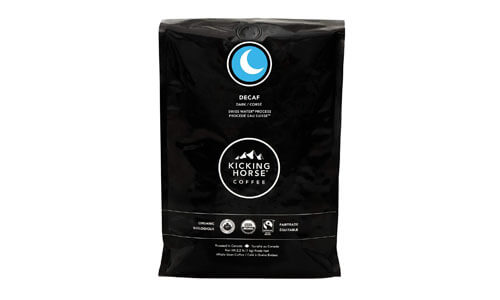 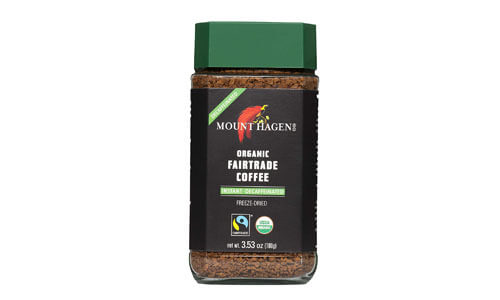 If you’re switching to decaf to be more health-conscious, the last thing you want is a bunch of chemicals in your coffee beans. The brands reviewed here use natural decaffeination, along with organic growing practices, so all you’ll taste is delicious coffee.

Tyler’s Coffee is the first decaf blend with a neutral pH balance. It has the full flavor you want from coffee, with none of the acid and caffeine that can upset your stomach and lead to heartburn.

The beans used in Tyler’s Organic Decaf coffee are grown in the Chiapas region of Mexico and have a balanced flavor with sweet, chocolatey notes. Their unique Z-Roasting process and natural decaffeination maintain all those complex notes.

The beans used in Kicking Horse Organic Decaf are grown on shady slopes in Central and South America, then roasted dark at their small Rocky Mountain roaster.

Since it’s whole bean, you can brew Kicking Horse Decaf using any style. The robust flavor is well-suited to Moka pots and espresso, and will give a bold cup brewed using automatic drip.

Instant coffee is a convenient way to make coffee when you’re traveling and is useful for bakers who want to add coffee flavor to dishes.
This Mount Hagen

Organic Instant Decaf Coffee has the same great flavor as fresh-brewed varieties and is made from high-quality Arabica beans. Just add water for a rich cup of coffee with excellent flavor depth. 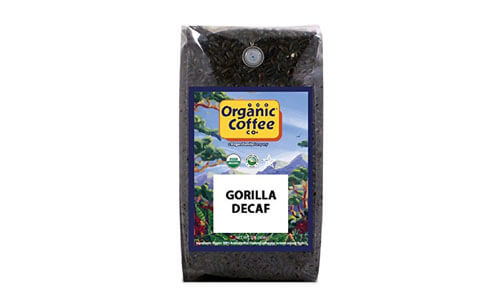 The Gorilla Decaf blend from Organic Coffee Co. mixes medium and light-roasted beans from across Central America. This gives it a bright flavor with creamy, chocolatey notes. It tastes especially vibrant brewed using manual methods, including French press and pour-over. 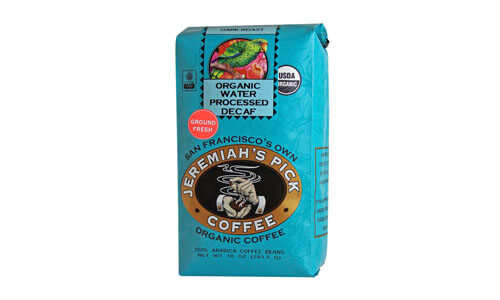 Jeremiah’s Pick Organic Dark Roast is our top choice for those who want a bold, strong cup from an automatic drip coffee maker or a single-serve brewer.

We also appreciate that it comes in 3 separate bags instead of a large 30-ounce package. This means you can get a lot at once with less concern it’ll go stale before you use it. 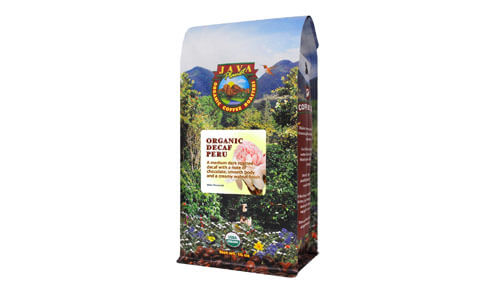 Java Planet coffee lives up to the true spirit of organic coffee. Their beans are GMO-free and no chemicals are used during growing, roasting, or decaffeination.

This single-origin Peru is grown at high altitudes for more flavor intensity. It’s a great choice for people who like to experiment with different brewing methods, with nuanced flavor notes and a rich, syrupy body. 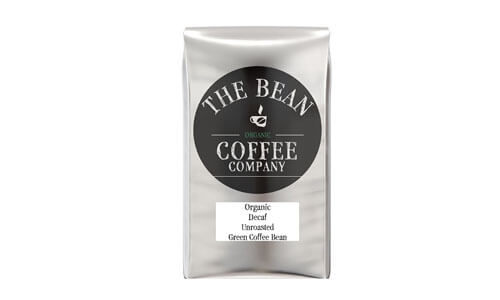 Most home roasters aren’t equipped to decaffeinate beans. These green beans from The Bean Coffee Company have gone through the Swiss Water process and are ready to roast to your ideal level. 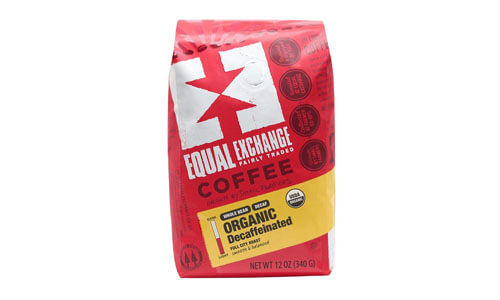 A Full City roast is a bit darker than medium but not as bold or oily as darker French and Italian roasts. As a result, it’s perfect for espresso machines, along with manual methods like French press.

The Equal Exchange Organic Decaf Coffee is a sweet, nutty blend with lingering cocoa and caramelization notes. It’s great with milk, too, which brings out notes of vanilla and suits its syrupy mouthfeel. 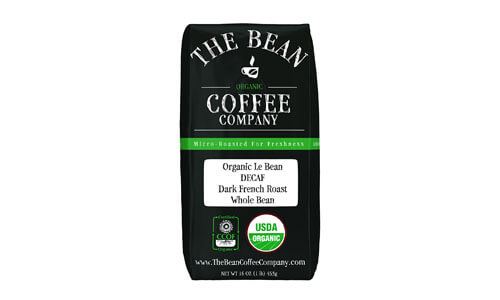 The micro-roasting process used by The Bean Coffee Company ensures the freshness and flavor of each batch. Their Le Bean Decaf is a dark French roast, great for brewing bold cups using single-serve or drip brewers, or for brewing rich espresso.

Like most things, decaf coffee is healthy in moderation. Its lower caffeine content means it’s less likely to cause anxiety, jitters, and other negative side effects than regular coffee, but it still contains all the healthy compounds.

Is Decaf Coffee Full of Chemicals?

Not if it’s processed naturally. Decaf coffee has a reputation for being loaded with chemicals, but this is largely based on outdated information.

The first decaffeination process was patented in 1906. Known as the Roslius Process, this involved steaming coffee beans in brine then using the compound benzene to extract the caffeine.

During the 20th century, benzene was found to be harmful to humans, mostly because it’s carcinogenic. This led coffee experts to develop new ways to decaffeinate that are safer and healthier for the people who drink it.

Two of these processes still use chemical solvents, usually either methylene chloride or ethyl acetate. Both chemicals have been certified by the FDA as posing an “essentially non-existent” health risk to humans.

Even so, there are plenty of people who’d prefer to have no chemicals at all in contact with their coffee beans—especially given the questionable history of chemicals used for decaffeination in the past, a list that includes toxic substances like chloroform and trichloroethylene (TCE).

Thankfully, there are two chemical-free methods for removing caffeine from coffee beans: the Swiss Water Process and the Carbon Dioxide Process.

In the Swiss Water process, beans are soaked to dissolve the caffeine. This water is then passed through a charcoal filter that captures caffeine but not the flavor compounds and is used to soak the caffeine out of other coffee beans.

The Carbon Dioxide (CO2) process also starts with soaking. The beans and the liquid are then sealed in a container and have carbon dioxide forced through them at high pressure. This dissolves the caffeine, leaving the oils and acids that give coffee its flavor intact.

Swiss Water and CO2 decaffeination are both more expensive than solvent-based methods. Because of this, companies that use them will usually advertise the fact (and often carry a higher price tag).

Phrases like “Natural Water Processed” and “SWP” are also signs that the coffee was decaffeinated without chemicals.

What Are The Side Effects of Decaffeinated Coffee?

While coffee has some notable health benefits, there’s a reason people have long been cautioned not to drink too much.

Drinking coffee can have negative side effects for some people.
Drinking coffee can decrease your ability to absorb minerals like calcium, iron, and zinc from food sources. The effect is negligible for most but can be a problem for those who are already deficient.

This is primarily due to coffee’s acidity. High metabolic acidity can cause the calcium to leach out of your bones, along with impeding your ability to absorb more, leading to lower bone density over time.

Acidic beverages like coffee can upset the stomach, too, aggravating conditions like acid reflux, IBS, ulcers, and heartburn. Drinking it without eating first amplifies these effects.

For most people, these effects are balanced out by the other foods and drinks you consume, especially if you only drink 1-2 cups a day. If you have an existing digestive or nutritional disorder, though, you should ask your doctor if it’s smart to cut out coffee completely.

Another option is to switch to a low-acid decaf blend. By removing both the caffeine and the acid, most of the potential negatives go away, too.

The jury is still out on this one. A 2005 study by the American Heart Association found statistically significant increases in LDL among decaf drinkers compared to non-coffee drinkers and regular coffee drinkers.

This study had an inherent flaw, however. The decaf drinkers were served Robusta, which has a naturally higher cholesterol content than the Arabica served to the caffeine drinkers. That, more than the caffeine content, was the likely source of the difference.

Coffee does contain some oils that can contribute to increased low-density lipoprotein (LDL) cholesterol. This is the “bad” cholesterol linked to deposits and clots in your arteries. The type of bean and how you brew it affect how much LDL ends up in your cup.

For one thing, only drink Arabica beans if you’re concerned about your cholesterol. You should also avoid non-filtered methods, like Turkish coffee, espresso, Moka pot, or French press.

Paper filters trap many of the oils from the coffee. This takes away some of the body, too, but it’s good from a health standpoint, drastically reducing the cholesterol content of the brew. Pour-over, automatic drip, cold brew, and AeroPress are all excellent brewing methods for a low LDL.

Is Decaf Bad for Anxiety?

No, decaf isn’t a problem for those with anxiety. Caffeine is the compound in coffee that can cause (or worsen) feelings of anxiety. There’s still some caffeine in decaf but not enough to have a noticeable effect on anxiety symptoms.

9 Reasons Why (The right Amount of) Coffee Is Good for You
https://www.hopkinsmedicine.org/health/wellness-and-prevention/9-reasons-why-the-right-amount-of-coffee-is-good-for-you

Coffee and Antioxidants: Everything You need to Know
https://www.healthline.com/nutrition/coffee-worlds-biggest-source-of-antioxidants

What You Should Know About Cholesterol and Coffee
https://health.clevelandclinic.org/what-you-should-know-about-cholesterol-and-coffee/