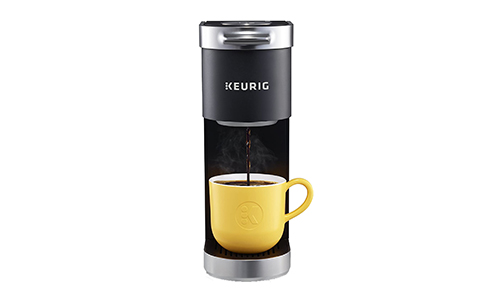 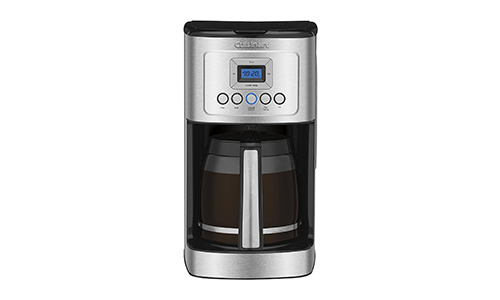 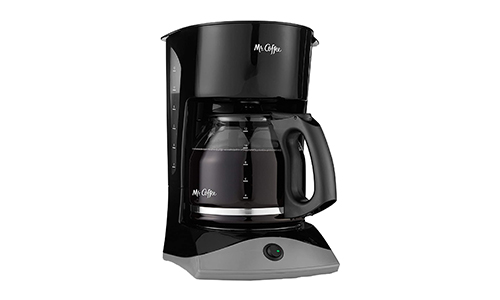 You don’t have to give up quality coffee just because you have a small kitchen. A small coffee maker is great for tiny homes, RVs, dorm rooms, and even your desk at work. Some models are so tiny you can even throw them in your backpack when you’re traveling. Sound like something you need? Check out the reviews below!

The K-Mini Plus is one of the slimmest coffee makers you’ll find, with a narrow profile of only 4.5 inches. It’s still tall enough to fit a full-sized travel mug, too, and has built-in pod and cord storage for easy transportation.

For a full-sized coffee maker that won’t hog all your counter space, we recommend this Cuisinart Perfectemp Coffee Maker. It’s not just a compact unit, either. It also has a full range of programming and customization controls and brews up to 14 cups in a batch, making it ideal for entertaining.

This straightforward brewer from Mr. Coffee is both simple and compact. You can turn it on with a single button push, and pour at any point during the cycle thanks to the pause-and-pour feature. It’s fairly lightweight for a 12-cup coffee maker, too, with convenient cord storage right in the device. 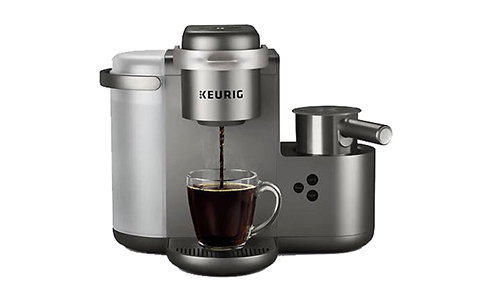 If you’re looking for a compact way to make cappuccinos and lattes, the K-Café from Keurig is your best bet. It’s a bit bigger than the models above but significantly smaller than any espresso machine you’ll find. Since it can brew full cups of coffee, as well, it takes the place of two appliances, saving you even more space. 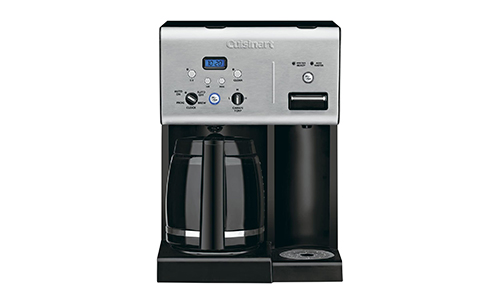 This innovative brewer from Cuisinart pairs a 12-cup coffee maker with a hot water dispenser. That’s perfect for making tea, instant soup, or hot chocolate. The reservoirs are independent, too, so you can use the two sides simultaneously. Its relatively small footprint is especially impressive considering this versatile operation. 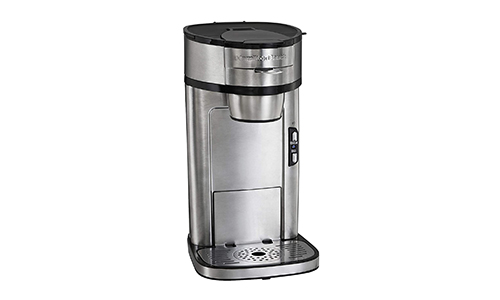 For many, a coffee maker’s height is less important than its width and depth. This Hamilton Beach coffee maker takes advantage of that to give the same top-tier operation you’d get from a larger unit. It’s fast-heating, quick brewing, and delivers a delicious cup of coffee with the press of a single button. 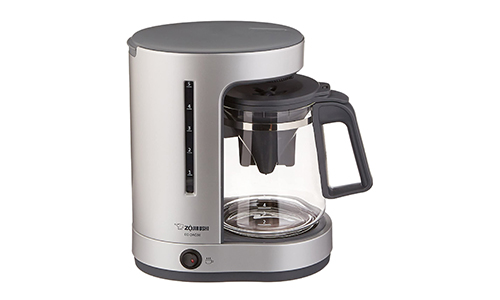 Here’s a slim unit that’s perfect for 1-2 people. This Zojirushi coffee maker puts the filter inside the carafe, saving space in the brewer and making it easier to clean up at the end. A removable water tank with a sight gauge makes filling it a breeze, while the one-button operation is easy for anyone to use. 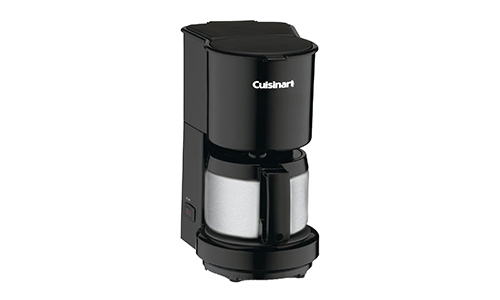 The stainless steel thermal carafe that comes included with the Cuisinart DCC-450BK keeps coffee hot without making it taste burnt or bitter. Its 4 cup size is great for couples, while the compact design is smaller than many single-serve coffee makers. Convenience features like auto-shutoff and brew pause limit mess and make it a breeze to use. 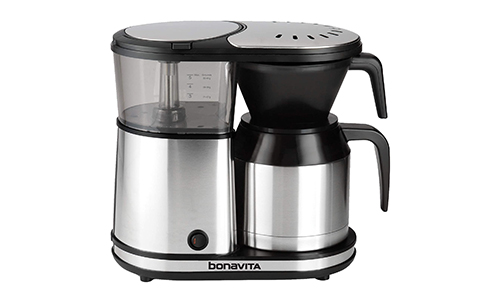 If you want a compact coffee maker but don’t want to sacrifice flavor, this Bonavita Coffee Maker is your best bet. It has advanced features like a pre-infusion mode and showerhead water dispenser, as well as a 1,100-watt heater that maintains optimal water temperature throughout the brew. 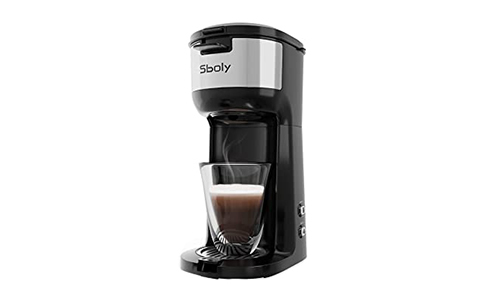 This remarkably compact unit from Sboly is also a very versatile choice. It comes with everything you need to brew from both ground coffee and K-Cups. Not only is it lightweight and small enough to take it on the road, it also comes with an insulated travel mug, so you don’t even need to provide the cup. 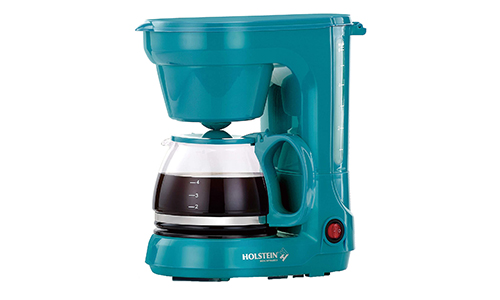 The eye-catching design of this coffee maker from Holstein Housewares will both fit with modern décor and fit on any size countertop. It has a removable filter basket for easy cleaning and one-touch operation for brewing. When you need to store it, the cord tucks away right inside the brewer. 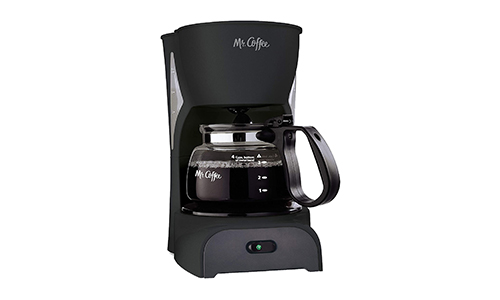 The Mr. Coffee Simple Brew is aptly named. It has a single brew start button with an indicator light so you know when it’s on, along with a warming plate to keep your coffee hot. The dual water windows are a nice touch, letting you see how much water is it the machine no matter how it’s positioned on your counter. 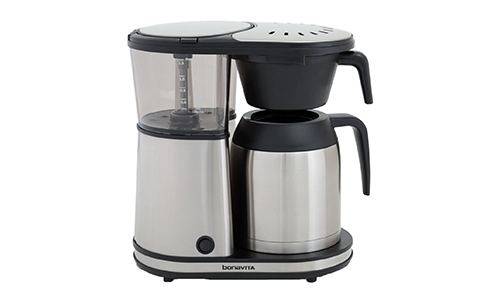 We’re not sure how Bonavita managed to fit so many high-quality components into this petite coffee maker, but we’re glad they did. It brews drip coffee even a barista will love thanks to the powerful heater and pre-infusion mode. You’ll appreciate how user-friendly it is, too. Start the brew with a single button push. It chimes a signal so you’ll know when it’s finished. 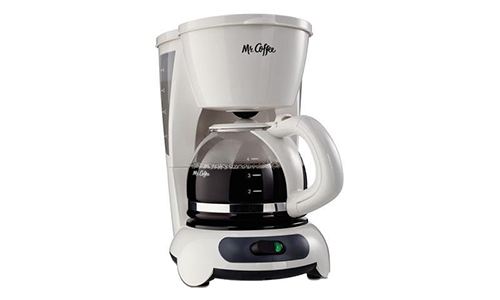 The Mr. Coffee Switch is similar in design to the Simple Brew above. Its convenience features include brew pause, one-button brew start, and dual water windows so you won’t overfill no matter how it’s positioned. The small counter space footprint makes it a perfect choice for apartment-dwellers and RVers, and it brews the perfect about of coffee for 1-2 people in each batch.

The size of a coffee maker doesn’t necessarily impact its quality. It doesn’t even necessarily limit your capacity. There are coffee makers on the list above that can brew a full 14-cup carafe in each cycle.

That said, some small coffee makers are better than others. To get the best flavor from your machine, you first need to understand what makes a cup of coffee taste good to begin with.

There are only 2 ingredients in brewed coffee: the ground coffee beans, and the water. Sounds simple, right? It is—in theory. The trick is making sure each of these is at a high quality level and in the correct ratio to each other.

On the water side of the equation, filtration and temperature are the most important factors. Look for a coffee maker that actually reaches optimal brewing temperature. Lower-quality machines may only reach 180°F or less, which isn’t enough for full extraction.

A built-in water filter can also be a benefit, here. Impurities in the water not only give the coffee a bad taste, they also build up in the machine and cause it to need more maintenance. Filtration systems solve both these problems.

For the best taste, you want a machine that lets you use fresh-ground coffee. If you’d rather brew from pods, just keep in mind the cup won’t be as flavorful and aromatic as it could be.

Things to Know Before Buying a Coffee Maker

How do you choose the right coffee maker for your home? Here are some questions to ask yourself while you’re shopping:

You’ll notice there are a few different brewing methods represented on this list—specifically drip coffee, single-serve brewing, and French press.

What’s the difference between these three styles of coffee, other than the kind of equipment they use? Let’s take a quick look so you know which one is right for you.

The most common coffee brewer today is the automatic drip machine. In this brewing method, water from the reservoir is quickly heated and dispersed over medium-ground coffee placed in a filter basket.

Convenience is the main advantage of drip brewing. Many automatic drip brewers even include programming features that will automatically start the brew at a designated time. Even without this feature, drip machines don’t require the same attention as manual brewing methods like French press and pour-over.

Naysayers of the drip method would say the disadvantage is the taste. You won’t get the same full flavor notes and aroma from a drip method as from manual brewing methods.

That said, a high-quality drip machine can produce delicious coffee. Just make sure there’s a powerful heater that gets the water the optimal 195°-205° brewing temperature, and that you use fresh-ground coffee when possible.

Also called pod brewers or K-Cup machines, single-serve brewers are the most convenient method. Since they brew from pre-portioned pods, you don’t need to worry about grinding or dosing. They also brew very quickly, sometimes in a minute or less.

Unfortunately, since the coffee in a pod has to be pre-ground, the loss of flavor with this method is unavoidable. Pod brewing is also more expensive per cup, and the plastic cups aren’t very environmentally-friendly.

You can get reusable filters for K-Cup brewers. These let you use ground coffee, eliminating many of these potential negatives. With a reusable filter, a pod brewer is more similar to an automatic drip machine. Just make sure you use one that gets the water hot enough for full flavor extraction.

French press is considered a manual brewing method, which means there’s no electricity or automation involved. Instead, the user manually grinds the coffee (coarse works best), heats the water, and controls the coffee-to-water ratio.

French press is the least labor-intensive of the manual brewing methods. It’s an immersion brewer, which means the coffee “steeps” in the hot water, similar to the process for brewing tea. When the brew is finished, simply press down on the plunger and pour.

That said, you will need to put in more effort with a French press than with an automatic drip or single-serve machine. In terms of brew time, it’s between the other two—slightly shorter than drip, but longer than single-serve.

The main advantage of French press is the taste. Since the water is in direct contact with the grounds the entire time, all of the oils and flavors of the beans are extracted. The result is a bolder, more flavorful cup.

French Press vs. Drip Coffee – Which Brewing Method is Right for You?
https://www.roastycoffee.com/french-press-vs-drip/

The Best Coffee Makers for Every Type of Coffee Drinker
https://www.forbes.com/sites/forbes-personal-shopper/2020/07/07/best-coffee-makers-for-every-coffee-drinker/#4df4ec39345f

The History and Benefits of Coffee Makers
https://didyouknowhomes.com/the-history-and-benefits-of-coffee-makers/

Keurig vs. Regular Drip Coffee Makers – Which Is Better?
https://espressomachinepicks.com/keurig-vs-regular-drip-coffee-makers/