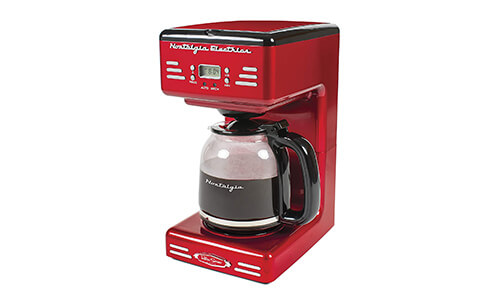 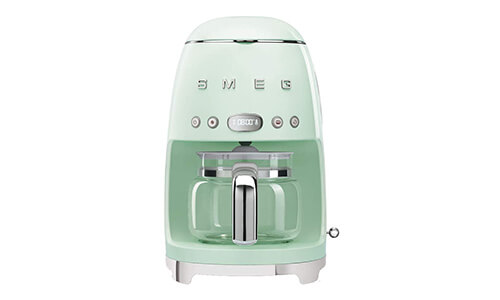 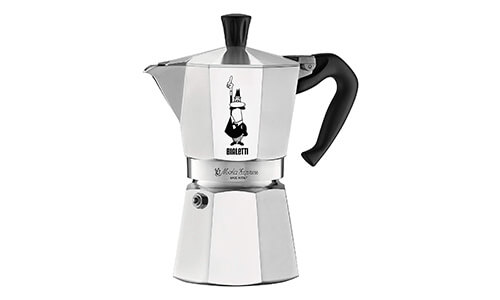 You don’t need to go antiquing to find a coffee maker that looks at home in a vintage kitchen. From updated versions of old-school brewing methods to fully-modern electric brewers with a retro aesthetic, there are options for every taste and budget.

We’ve reviewed our favorites here. Even if you don’t find your dream machine on the list, they’re bound to give you some inspiration!

Don’t take the retro design of the Nostalgia Programmable Coffee Maker to mean it’s an old-fashioned machine. It has all the convenience features you’d expect from an automatic drip machine, including automatic shut-off and a pause-and-serve feature, with 24-hour advance brewing that’s easy to program using the intuitive display.

If it weren’t for the digital display, you could easily mistake this pod-shaped coffee maker for a ‘50s appliance. It’s both stylish and fairly compact, so it will fit into any size or style of kitchen. The permanent filter and adjustable brew size cut down on waste, sparing you the need for paper filters and ensuring you only make as much coffee as you’ll drink.

The Bialetti Moka Pot was the original home brewer, and a great way to get a truly vintage brewing experience. This manual brewer produces a pot of rich, espresso-like coffee in less than 10 minutes with no electricity required. It’s portable and durable, too, making it a great choice for camping and traveling along with use in retro kitchens. 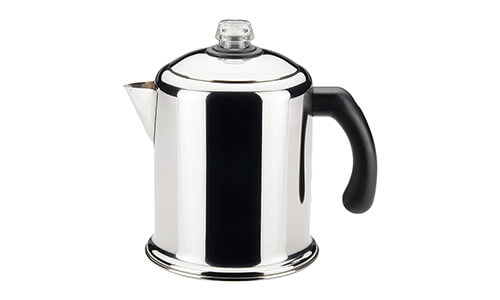 Percolator coffee was all the rage in the ‘50s and ‘60s. This Farberware Yosemite Coffee Percolator brings this vintage brewing technique into your modern kitchen. The heavy-duty stainless steel brewer and filter basket are dishwasher safe and built to last, with a stay-cool handle and tight-fitting lid for safe, easy serving. 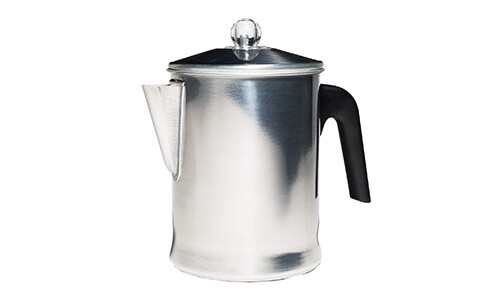 The Primula Today Stove Top Percolator is made of light-weight aluminum with a stay-cool plastic handle. This makes it a great option for camping and traveling, as well as an affordable vintage brewer for the home. 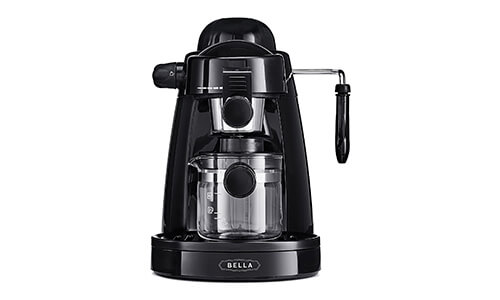 The Bella Personal Espresso Maker has a unique bullet-style design that would look at home in either modern or vintage kitchens. It’s the best choice if you want to make café drinks like lattes and cappuccinos, with a built-in adjustable steam wand to both warm and froth the milk. 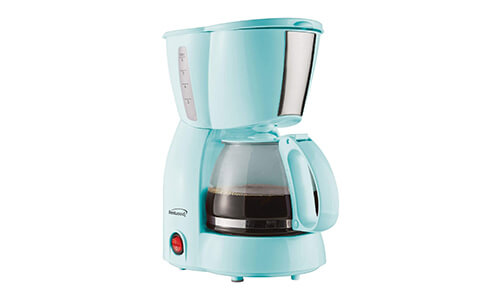 This Brentwood automatic drip brewer has a 4-cup capacity that’s perfect for one or two-person households. Its sleek design and pale blue color both give it a retro look and it’s made of BPA-free glass and plastic so you can use it safely with no extra flavors or chemicals getting in your brew. 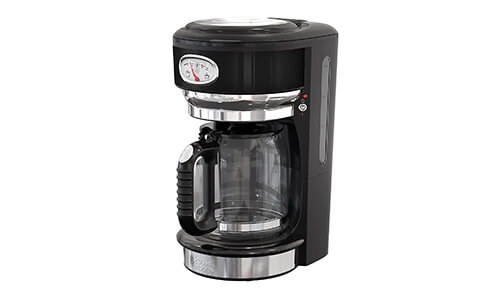 The Russell Hobbs Retro Style Coffee maker has a unique steampunk vibe. The front gauge is useful, too, showing the brew progress and tracking how long the carafe warmer has been on so you know how fresh the coffee is. It’s a lot more modern inside than it looks, with a showerhead-style water dispersal that saturates and extracts the grounds more evenly than other automatic drip machines. 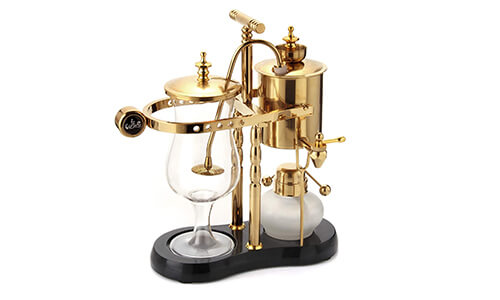 Speaking of steampunk, you’ll feel like a mad scientist when you use this siphon coffee maker from Diguo. It’s admittedly not the quickest or most convenient way to brew a pot of coffee, but its unique look can make it the centerpiece of a retro kitchen, and a great conversation starter for when you entertain. 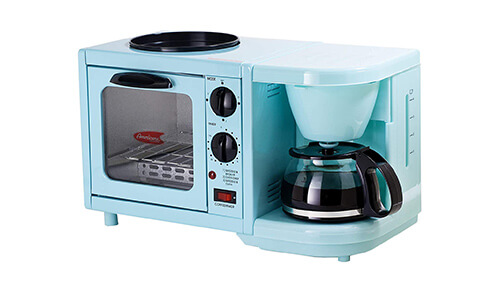 All-in-one appliances are so retro. This Elite Gourmet Americana Coffee Maker is a complete breakfast machine, with a griddle, toaster oven, and automatic drip brewer in one compact machine. That makes it a functional way to save counter space at the same time it adds a vintage vibe to your kitchen. 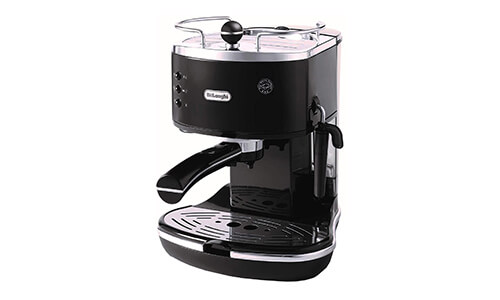 Here’s another excellent compact option for espresso lovers. The De’Longhi ECO310 Espresso Machine is made to the same high standards as larger machines, with an advanced pump that reaches a full 15 bars of pressure and a durable stainless steel boiler. Separate thermostats for the steam wand and group ensure you’re brewing and steaming at the right temperature. 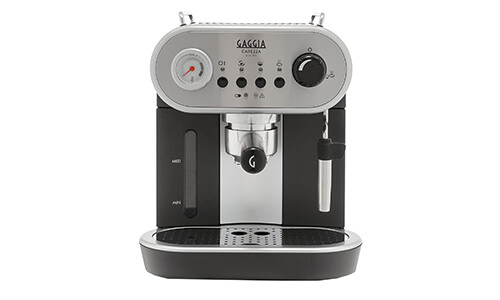 With its curved display, pressure gauge, and steam knob, the Gaggia Carezza looks like a ‘50s robot—a great vintage aesthetic for a retro kitchen. It’s also easy to use and fill, with an adjustable steam wand and an easy-to-read pressure gauge on the front so you know you’re brewing at the right pressure.

Humans have been drinking coffee for hundreds of years in Africa and the Middle East, where the beans grow naturally. It reached a more global audience in the 13th century when European traders were introduced to coffee from the Arabian peninsula.

In these early days, coffee was boiled together with hot water. The modern Ibrik isn’t that different from traditional pots used to prepare the drink hundreds of years ago. Coffee pots with spouts became popular in Europe but they still used the same basic boiling method.

The next revolution in coffee brewing came in the 18th century with the invention of filters. Anecdotally, the first coffee filter was a sock filled with ground coffee that someone poured water through. Cloth filters became popular first, followed by metal filter baskets like those seen in modern percolators.

This was the dawn of both drip brewing and immersion brewing. The first drip pot, the Biggin pot, came out in the 1780s, with the first French presses following in the early 1800s. Siphon pots hit the market in the 1840s, leading to the development of the Moka pot in Italy. Meanwhile, in the United States, various percolator prototypes emerged, with the one in use today coming out in the 1880s.

All of these inventions focused on small-batch brewing for the home. It wasn’t until the late 19th century that Italian inventor Luigi Bezzera developed the pump-driven espresso machine for cafes. Other inventors ran with his idea in the 20th century, adding electronic components and improving the pump mechanism.

Coffee brewing methods have continued to proliferate through the 20th and into the 21st century. For the most part, though, they’re refinements and variations of existing brewing methods and can trace their roots back to 19th-century inventions.

There are dozens of ways to make coffee, with new methods and machines being invented all the time. In general, though, these can be broken down into 4 categories: pressure brewers, drip brewers, immersion brewers, and boiling brewers.

Boiling was the original way to make coffee but is the least in use today. Turkish coffee is the most common example and even that is fairly rare in western cafes. For the other three methods, there are a lot more options. Here’s a break-down of what differentiates them:

Adding pressure to the equation allows these brewers to extract flavors more quickly than methods using hot water alone. Coffee brewed under pressure also has a thicker, more viscous body and the strongest flavor, the reason many people dilute espresso with milk or water before drinking it.

In this method, the coffee beans are in direct contact with the water. You’re essentially “steeping” the coffee, much the way you would with tea. The longer the water is in contact with the grounds, the stronger the extraction will be. Altering the heat also changes the rate of extraction and can result in a different flavor profile, such as with cold brewing, which is less acidic than hot water brewing methods.

In drip brewing, coffee is placed in a filter basket and hot water is poured over it then allowed to drip down through the grounds into a cup or carafe. How finely the coffee is ground determines how quickly the water drips through and is the main factor in the strength of the brew.

Even filtered water contains trace minerals. Over time, these minerals are left behind in the water lines and heating element of the coffee machine, forming deposits known as limescale. You’re likely familiar with these if you’ve lived in a home with hard water—it’s the same stuff that leaves white streaks on kitchen and bathroom fixtures.

Significant limescale buildup can prevent the coffee maker from heating water to the right temperature, resulting in a weak cup of coffee. It can also clog water lines, which prevents the water from flowing over the coffee like it should. With enough build-up, the pressure caused by clogs can permanently damage the machine.

Descaling removes these lime deposits, preventing damage to the machine and maintaining the flavor of your coffee. It’s easy to tell when it’s time to descale a manual brewer since you’ll be able to see the build-up. Brewers with hidden lines, like espresso and automatic drip machines, should be descaled at least every three months, and as often as once a month if you have hard water.

How to Clean a Coffee Maker
https://www.thespruce.com/clean-coffee-maker-with-vinegar-1907384

The History of Coffee Brewing
https://historycooperative.org/history-of-coffee-brewing/