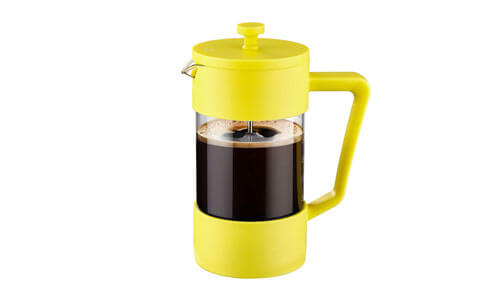 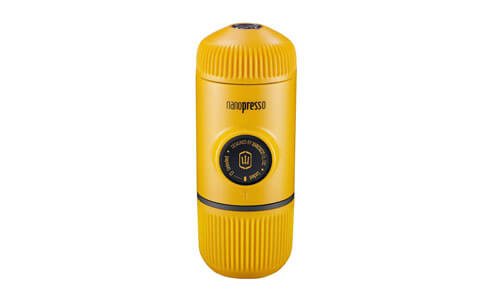 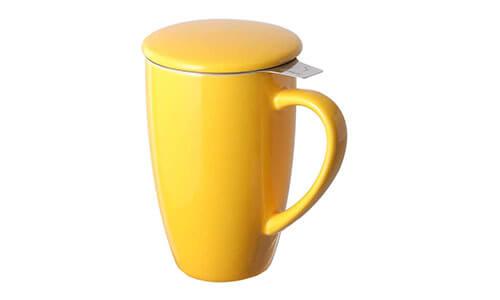 A splash of yellow in your kitchen can have a calming and mood-boosting effect—especially if it’s your coffee maker, the appliance most people look at first every morning. Here are our favorite yellow coffee makers for anyone who’s looking to brighten up their coffee-brewing routine.

French press is one of the easiest manual brewing methods, producing a rich cup with more body and flavor than paper-filtered brews. The Veken French Press Coffee & Tea Maker is a fun-looking and functional way to go about it.

The plunger mechanism on the Veken French Press is stainless steel, with a heat-treated glass carafe and a stay-cool plastic handle, top, and base. We especially appreciate the scale markers on the side, which make it easy to see how much water you’ve poured in.

The Wacaco Nanopresso is the ideal brewer for rich espresso on the go. At just 6 inches long, it fits easily in a backpack or briefcase, and the end cap doubles as a cup for brewing into.

The pumping mechanism on the Wacaco Nanopresso is impressive, too. It reaches 18 bars of pressure with about 15% less force than other portable espresso makers, letting you quickly and easily brew rich espresso with full crema anywhere you are.

It doesn’t take a complicated set-up to brew a tasty cup of coffee. The stainless steel infuser insert that comes with this Sweetjar Porcelain Tea Mug can be used for by-the-cup manual brewing of coffee or loose leaf tea.

Porcelain is a great material for heat retention. The included lid ensures a consistent temperature during brewing and can be used as a tray for the infuser when the brew’s finished. 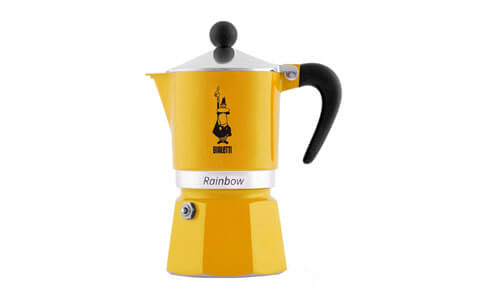 Bialetti stovetop espresso makers were the original home brewer. This versatile Bialetti Rainbow Espresso Maker can be used on both gas and electric stovetops, or even over an open flame when you’re camping. 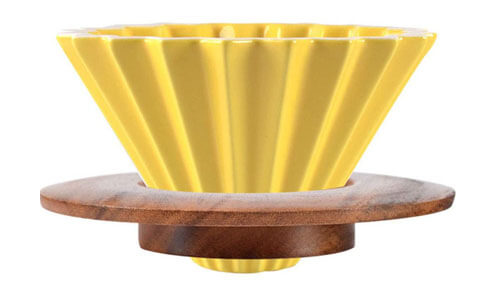 For single-cup brewing, pour-over is the best way to unlock the full flavor of your coffee. This Mocohana Ceramic Coffee Dripper has an elegant design, and it’s functional as well as beautiful. The deep ridges on the inside ensure even flavor extraction by preventing dry spots from forming in the grounds.

The wooden stand included with the Mocohana Ceramic Coffee Dripper has a wide 4.5” diameter that will fit nicely on most mugs. It has excellent heat retention, too, maintaining optimal water temperature for the entire brew. 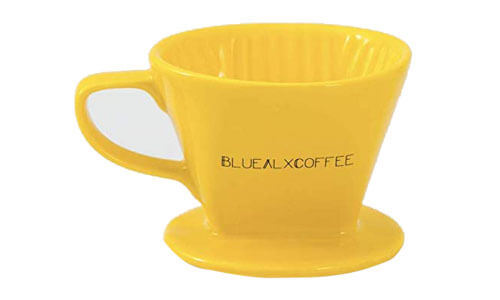 This Blue Axl Coffee Dripper is another excellent choice for pour-over brewing. It has a convenient one-piece design, with a broad base and sturdy handle that stays cool throughout the process so you can safely remove it from the cup when you’re finished.

The ridges along the inside of the Blue Axl coffee dripper help to ensure a more even saturation and extraction across the entire bed of grounds. Its thick ceramic walls resist cracks and won’t absorb odors, letting you brew delicious coffee for years. 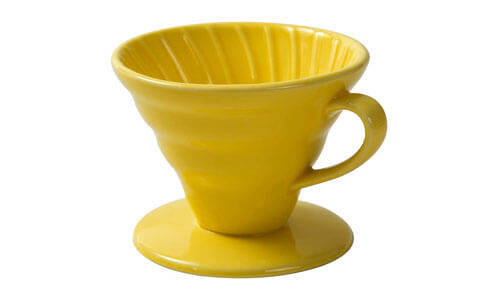 The ridges in the Airmoon Coffee Dripper take a spiral shape around the inside of the cone, encouraging water to flow consistently around the outer edge and down into your cup. Its steep V-shaped design also improves the water flow for a fast, even extraction.

This is a durable dripper, too. The high-quality porcelain is strong enough you can wash it in the dishwasher without worrying it’ll chip or crack. 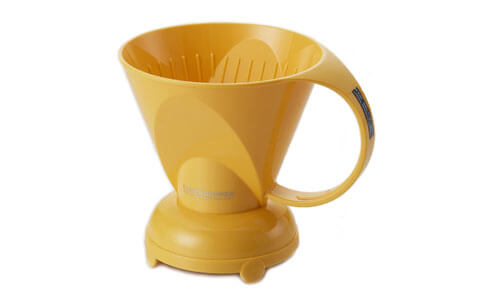 The Clever system takes a unique approach to single-cup brewing, merging a pour-over dripper with a stopper that holds in water to simulate the immersion method. The result is a full-flavored brew similar to French press, but with the smooth, grit-free texture of pour-over.

This is a portable brewer, too, made of lightweight BPA-free plastic that you can throw in your backpack without worrying that it’ll break. The base fits securely on most mugs, including travel mugs, and doesn’t require specialized equipment so you can use it anywhere.

The 15 Most Popular Types of Coffee Makers Compared

The omnipresent automatic drip brewer is the most popular brewing method in America because of its convenience. Just fill it up and press start; the coffee maker takes care of the rest.

Automatic drip is a filtered brewing method, which means a smooth cup with little to no sediment and a balanced flavor.

Pod brewers see the convenience of auto-drip machines and kick it up a level with pre-dosed pods and a brewing time as fast as 30 seconds.

The sacrifice you make for this is flavor. The coffee in a pod isn’t as fresh as whole bean, and you don’t get as much control over the ratio and other factors that let you customize the flavor.

Pour-over is a manual version of the drip method. It’s the favorite brewing method for unlocking nuanced flavor notes from high-quality coffee. Baristas love it because it gives the user complete control over every parameter of the process.

It doesn’t take long to brew pour-over (2-3 minutes on average) but it’s a hands-on process and can be tricky to master. You’ll also want a few extra accessories to do it right, like a kitchen scale and a goose-neck kettle.

The Clever system looks like a pour-over dripper, but with one key difference: there’s a valve on the bottom that holds the water in. This gives you the smooth grit-free texture of filtered brewing with the water contact time of immersion brewing (and the strong flavor that comes with it).

Clever brewers also don’t require the circular pulsed pour that’s used in pour-over, so they’re a bit easier to learn how to use.

Best for: Lovers of full-bodied coffee

French press is the simplest of the manual brewing methods. Just put in your grounds and water, let them sit for 3-5 minutes, and press down on the plunger.

The metal filter in a French press allows more oils and flavor compounds into the brew, resulting in a bolder cup than drip methods. The main down-side to French press is that you will get some sediment in your cup.

Best for: Tea and coffee versatility

Soft brew systems are basically teapots for coffee. Most use a metal filter insert that goes inside the pot. This lets you “steep” the coffee as long as you’d like then easily remove the grounds so you can serve from the same container.

Since this is the same basic way you brew loose-leaf tea, you can use soft brewers for both beverages. Most use non-porous materials like ceramic, glass, and stainless steel that won’t retain odors or flavors between brews.

Some of the acids in coffee don’t become soluble unless they’re heated. Cold brewing takes advantage of this, immersing ground coffee in water that’s room temperature or cooler for 18-24 hours, slowly extracting some flavors and leaving others behind.

The result is a concentrated brew that’s up to 2/3 less acidic than hot methods. The downside is obvious: it takes a long time. You can store cold brew for 2 weeks in the fridge, though, so it can still be convenient if you make it ahead of time.

Best for: Traveling and portability

The AeroPress is a versatile hybrid brewing system. Depending on how you set it up, it can be used for espresso-style brewing or immersion brewing, all from a compact plastic device that’s easy to take with you.

Like other manual brewers, it can take a bit of trial and error before you get your AeroPress technique down. Once you do, though, it’s a fast and easy way to brew single cups.

Best for: Cafes and specialty drinks

This is the style of espresso machine you’d see in a coffee shop. You can find home versions, too, although the good ones don’t come cheap and they take up a lot of space and power.

In espresso, water is forced through finely ground coffee under high pressure, brewing a concentrated shot with a thick texture in about 30 seconds. This is the ideal machine for making drinks like lattes and cappuccinos, but the learning curve is high if you’re not a trained barista.

Also called Moka pots, stovetop espresso makers are an easier to use and more compact alternative to pump-driven espresso machines.

While the coffee brewed in a Moka pot has a similar taste and texture to espresso, it’s not “true” espresso by official standards. Most notably, it doesn’t have crema so it can’t be used to make latte art. That’s a non-issue for most home users but a deal-breaker for baristas.

Best for: Espresso on the go

These slim, cylindrical brewers have a hand-driven pump mechanism inside, along with a water chamber and filter basket. Some models can even reach similar bars of pressure as full espresso machines and may produce crema on top of the shot.

It takes some elbow grease to get enough pressure for brewing from most portable espresso makers. From an ease of use standpoint, they’re on par with pour-over and AeroPress—you’ll need to be invested for the whole brew but it doesn’t take that long to do it.

Best for: Strong coffee at home

The percolator method was the home brewer of choice before the automatic drip machine. The brewing process happens automatically once the heat is applied, with the water rising up through the central pipe and dripping over the grounds via steam pressure.

Percolators do need to be watched during the brew to avoid boiling or over-extracting the coffee. You also may get some grit in your cup, though using a paper filter in the basket can eliminate that issue.

Best for: Parties and offices

Electric percolators use the same brewing process as their manual counterparts but come with a plug-in base that heats the coffee and keeps it warm. This means they don’t need as much supervision.

Like automatic drip machines, electric percolators have a built-in warming function that keeps coffee hot until you’re ready to serve it. Most can also be used to heat other beverages, one reason they’re especially useful for hosting large gatherings.

These compact metal drippers sit directly on your cup and produce a strong, concentrated brew similar in taste to espresso but with a lighter body.
You can serve

Vietnamese coffee hot but it’s at its best over ice, especially mixed with some sweetened condensed milk.

Also called a vacuum pot, siphon brewers are how a mad scientist brews their coffee. Like a percolator, water is heated in the lower chamber and forced through coffee grounds, but it uses a cloth filter that produces a smoother brew.

Siphon brewers can be delicate and trickier to use than other methods. They can also take a while and aren’t the easiest to clean. In the plus column, though, they’re super fun to watch and can be a great conversation starter when you’re entertaining.

10 Different Types of Coffee Makers: Which is Right for You?
https://coffeeaffection.com/different-types-of-coffee-makers/

The Most Common Types of Coffee Makers Explained
https://www.allrecipes.com/article/types-of-coffee-makers/